skip to main | skip to sidebar

A publisher joins the party!

Apologies for keeping everyone in the dark all summer regarding the status of the Nintendo History System, but the comic has been picked up by a major publisher who wants to publish the whole series as a single graphic novel sometime in 2011/2012.

This means I'm working with an editor now (a fantastic one at that), but it also means that the entire comic is being reworked from top to bottom to turn it into a "real" comic book...which is fine with me, as this gives me more time to hunt down interview subjects for the book.

My publishing deal allows me to continue self-publishing individual chapters of the NHS, however, so you should be seeing new work from me before the end of the year. In the meantime, here's a rough/unfinished page from volume 2 of The Nintendo History System: 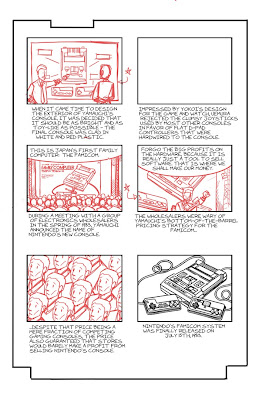 Welcome to The Nintendo History System!

The Nintendo History System is a self-published graphic novel written and drawn by me (Bill Mudron) and self-published in chapter-long chunks. The first chapter - an 11-page prologue focused on the founder of the Nintendo company, Fusajiro Yamauchi, and his great-grandson, Hiroshi Yamauchi - will debut at The Stumptown Comics Festival in Portland, Oregon on April 24th, 2010.

I was inspired to create the The Nintendo History System after reading a fantastic manga called "Project X: Cup Noodle", which is a surprisingly entertaining comic about the invention of Nissin's Cup o' Noddle instant-soup. You would think that would be boring as hell to read, but the authors did a great job of dramatizing every decision made in the creation of Cup o' Noodle soup - everything from the styrofoam cup design to the search for shrimp that would retain it's pink color after being dehydrated was made into a life-and-death struggle of epic proportions. 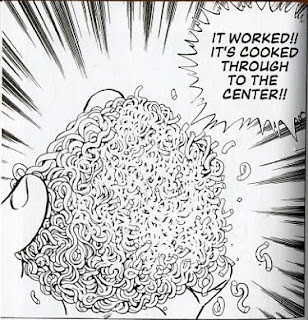 Being a hardcore videogame addict, I naturally began to wonder why no one had ever created a similar "info-tainment" comic about the videogame industry, and thus, after some thinking, The Nintendo History System was born. 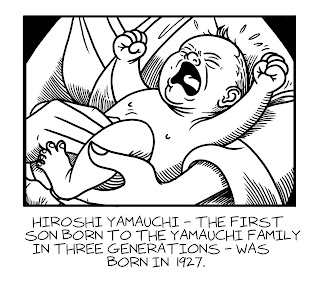 While I can't guarantee that TNHS will be *quite* as operatic as "Project X: Cup Noodle" (if it were, the comic would end up being 1000 pages long rather than just 100), I hope you'll enjoy it nonetheless.
Posted by Bill at 11:15 AM 7 comments: